On what project was Michelangelo working when he died? 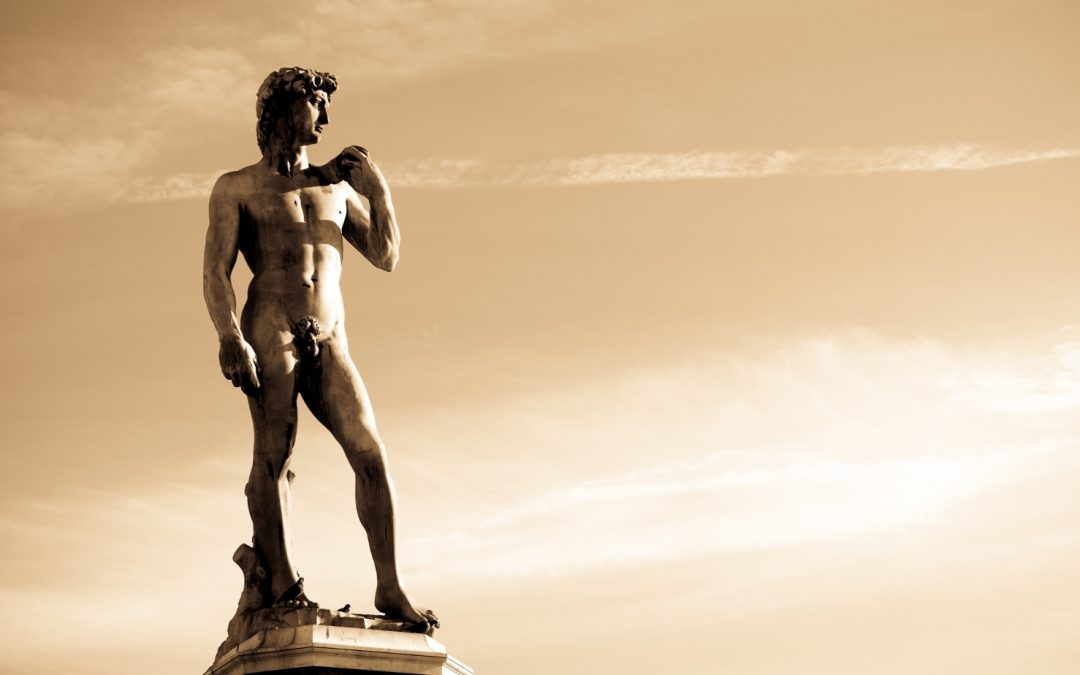 If there is an artist’s name that is known around the world, even by those who are not in the field of art, it is Michelangelo…

His name is synonymous with greatness and is celebrated in the world of art, poetry, and architecture. Even though many people may know his name, they might not know what he did, why he is famous, or what he was working on before he passed away. Your attention is a service with psychology homework help, art history, as well as in other disciplines.Here are a few facts about Michelangelo, who he was, what he did, and what he working on before he passed away.

Michelangelo, born Michelangelo di Lodovico Buonarroti Simoni, was an architect, painter, sculptor, and poet during the Renaissance period, and is best known for his influence over Western art as it is known today. He is known all around the world, and is considered to be one of the greatest artists of all time, and more importantly, the greatest artist in his lifetime. 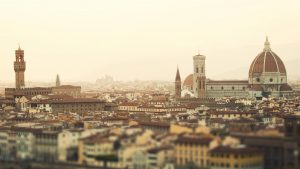 He was born in Florence, into a family of nobility, which had unfortunately lost some of its stature shortly before he was born. Despite his father’s objections, he became an apprentice at the age of 13 to a famous painter at the time, by the name of Domenico Ghirlandaio. After only being an apprentice for one year out of the 3 he was scheduled for, he left early, to then work for Lorenzo de’ Medici, the ruler, in all but name of the city.

From 1494 to 1495, after the death of Lorenzo, he worked in Bologna as a sculptor, having replaced the previous sculptor, to complete his first really notable works of art, and allowed him to discover his love for marble as his choice of medium. 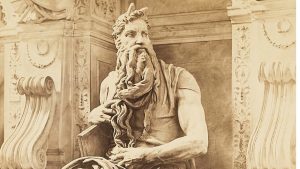 At the age of 18, Michelangelo created one of his first most famous sculptures, the San Spirito Crucifix. This was done to thank the Augustine monks at San Spirito for letting him stay there shortly after his patron, Lorenzo de’ Medici, passed away. Of all the great works of Michelangelo, probably his two most famous were completed before the age of 30. His mesmerising “Pieta”, now found in Saint Peters Basilica and arguably the greatest sculpture of all time, his “David“, completed in 1504. 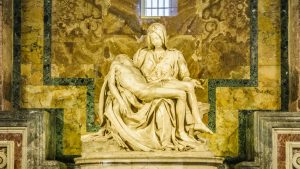 Around the same time, Michelangelo created the Madonna of Bruges, considered very innovative for its time. It was 6 feet tall, was very complex, and carved out of one slab of marble, something that had rarely been attempted before and became a staple of his genius.

Although he didn’t consider himself a painter, between 1508 and 1512, Michelangelo completed perhaps the most famous frescos the world has ever seen, the ceiling of the Sistine chapel. For four back-breaking years, the master himself created some of the most iconic art, that still resonates without rival to this day. the most iconic being the “Creation of Adam”.

Take a 3D virtual tour of the Sistine Chapel with ItalyGuides.it

Skip the lines at the Vatican!

The best way to see the Sistine chapel is to skip the line! What we mean by that is to buy a “skip the line ticket”. Find out more by clicking here

“There is no greater harm than that of time wasted.” Michelangelo

Between the years 1513 to 1516, Michelangelo was already quite famous and was entrusted by the Medici Pope Leo X to complete the tombs of his predecessor. Unfortunately, Michelangelo never got to finish the project. During this time, he finished only one of his Dying “Slaves”, only one out of six were completed.

Notably, from 1534 to 1541, Michelangelo returned to the Sistine chapel to complete the Altar. His masterful interpretation of “The Last Judgment”, an incredible Fresco that perfectly compliments his work of decades earlier. 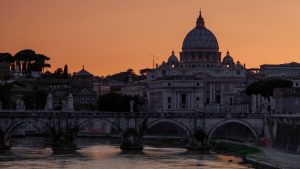 Saint Peters, Vatican, view from across the Tiber in Rome

What was he working on before he died?

Before Michelangelo passed away, he was in the process of undertaking a project of the utmost architectural significance; St. Peter’s Basilica. Pope Paul III commissioned him to continue the construction of the building, passed on from earlier masters who had spent years trying to put the project together. This would be no easy task since Michelangelo was already in his seventies.
Antonio da Sangallo the Younger had changed the plans of the original chief architect Bramante and had planned on creating something more expensive and ornate, which did not please Michelangelo. He then combined the plans of Bramante with his own, creating something truly breathtakingly beautiful. The artist said that he could not abandon the project, nor leave it unfinished as he considered that to be a great sin. What’s more, he refused to accept payment for this project, not knowing that it would one of his greatest accomplishments and a large factor of influence for the architectural world and the oncoming Baroque period.

“Every block of stone has a statue inside it and it is the task of the sculptor to discover it.” – Michelangelo

Closer to the days of his passing, Michelangelo continued his work on his Rondanini Pietà, a sculpture that truly captured the essence of fragility and his own mortality, since the project was unfinished.

So what was Michelangelo working on before he passed in 1564? One of the possible last drawings or designs attributed to Michelangelo was found in 2007. It was a red chalk sketch of one of the columns as part of the dome of Saint Peters. Although he never saw it finished, one of his many great legacies was Saint Peters itself. It is this that Michelangelo was working on when died at the age of 88 before his body was once again returned to his home city of Florence.

What’s your favourite piece by Michelangelo? Tell us in the comments