For over fifty years, baroque work in Rome was dominated by 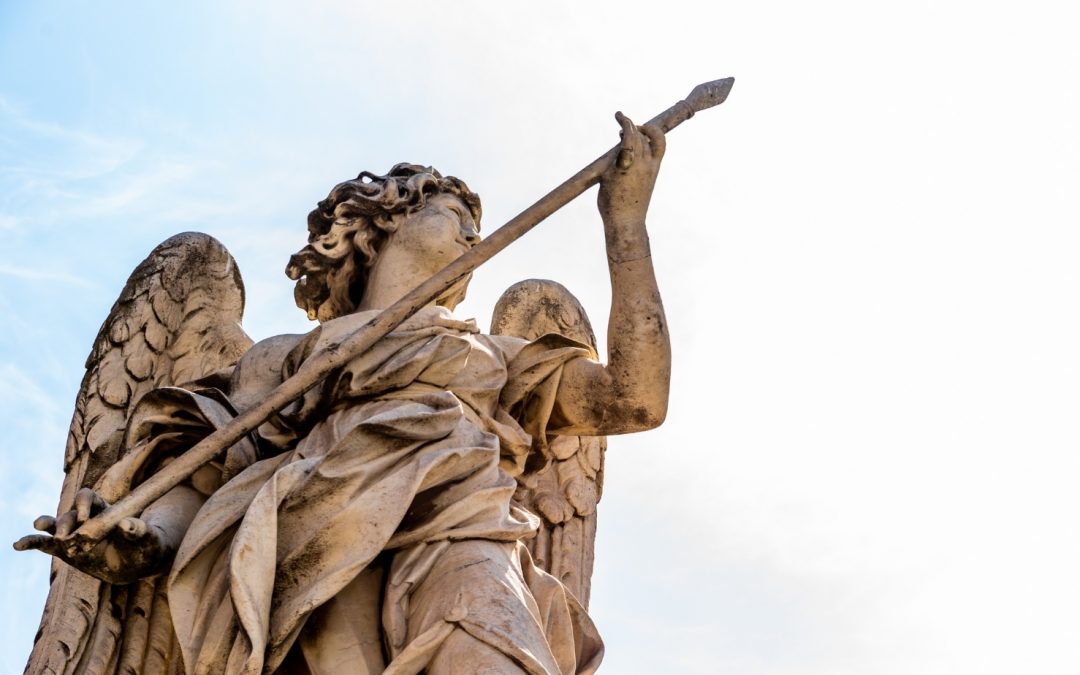 The Baroque period brought us many remarkable artists. From painting to sculpture to architecture, countless artists contributed their blood, sweat, and tears to bring us one of the most extravagant periods of art history.

Notable Baroque painters such as Carravagio, Rembrandt, Diego Velasquez, all produced an abundance of outstanding works and immediately spring to mind. But when it comes to sculpture and architecture, one name always pops up, the great and prolific Gian Lorenzo Bernini. Let’s take a deeper look into his creations and the life of the artist who left an immeasurable legacy, forever connected to this grand art movement.

Born to a Sculptor

Gian Lorenzo Bernini was born in 1598 in Naples, as the sixth of thirteen children. He was the son of Italian sculptor Pietro Bernini, who helped kickstart his career. Bernini was the true example of a childhood prodigy. Already at the age of eight, he was recognized as a genius who worked tirelessly, delivering brilliance to his works. This diligence and talent earned him the respect and admiration of powerful patrons, with none other than Pope Paul V being the first among them. He recognized the young Bernini as “the Michelangelo of his century” and financed his first works. Bernini moved to Rome in 1606, after which he would rarely leave, only when commissions called. 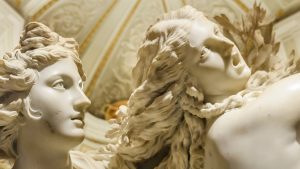 He recognized the young Bernini as “the Michelangelo of his century”

Gian Lorenzo trained in his father’s workshop in Rome, assisting the creation of several sculptures and shaping his art style. Thanks to his talent, Bernini quickly established himself as a completely independent sculptor. He studied Ancient Greek and Roman marbles and Renaissance painting, which influenced his works. One of his early pieces was “Apollo and Daphne”, an artwork that depicts the culmination of their story in the metamorphosis. Using his illusory vision, Bernini transformed human flesh into tree bark and leaves, undoubtedly a masterpiece.

The sculpture “David” presents the biblical protagonist in the scene in which he cast a stone at his nemesis. As a point of difference from Michelangelo’s “David”, he brought the sculpture to life through dynamic movement and strong facial expressions conveying powerful emotion. His virtuosity in sculpture is further demonstrated in his masterpiece “Ecstasy of Saint Theresa” in which he depicts Teresa of Avila experiencing mystical manifestation. Portraying her vision, he shows an angel holding an arrow of divine love and piercing her heart. The sculpture richly narrates the story through sentiments seen on both of their faces, and the movement is incredibly captured in a still position.

His virtuosity in sculpture is further demonstrated in his masterpiece “Ecstasy of Saint Theresa” in which he depicts Teresa of Avila experiencing mystical manifestation. 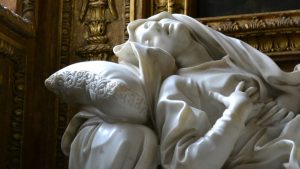 From Paris and Back to Rome

Bernini’s talent and works of art became famous all over Europe, he was deemed the most important Roman artist. This attracted the attention of King Louis XIV who called him to work as an architect on the Palace of the Louvre. He was so popular that crowds gathered on the streets to marvel at the renowned artist. However, things changed for the worse very soon, as his architectural plans for the Louvre were rejected, and the lack of respect between Bernini and the young king further distanced them. The only work that remains from his time in Paris is a portrait bust of Louis XIV which portrays the king glaring with godlike authority, equaling his self-confidence. Bernini’s trip to France turned out to be a short trip lasting five months, after which he returned to Rome and worked on Saint Peters Square designing the huge piazza that leads to the Basilica itself. 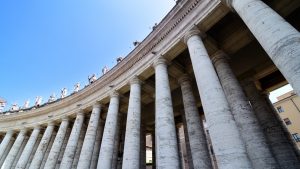 The Piazzas and Fountains of Rome

The later period saw countless commissions throughout Rome. Notably, two sculptures: “Daniel in the Lions’ Den” and “Habakkuk and the Angel” for the Church of Santa Maria del Popolo in Rome. Among his important late works for the church was the Altieri Chapel of San Francesco a Ripa. Bernini was also a talented creator of Roman fountains, which were among his most applauded works. His first created fountain was “Barcaccia”, which along with some other fountains represented a challenge because the water pressure was too low in some parts of Rome. Other fountains that are worth mentioning include the Fountain of the Triton, Fountain of the Bees with the most iconic being the Fountain of the Four Rivers. This masterpiece dominates Piazza Navona and remains in an iconic piece of the city. Today, it is hard to walk through the centre of Rome without stumbling across a work of Bernini. 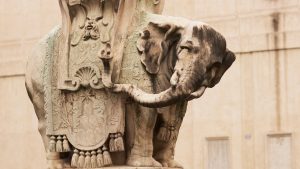 So for the gold star…

For over fifty years, baroque work in Rome was dominated by?

So we now know it was without question Bernini. The legacy of Bernini and how we view the Baroque cannot be underestimated. Although the name has stayed strong throughout Art History, it’s easy to take for granted the immense influence he had and how over a 50 year period he dominated the cultural works of Rome and defined an entire Artistic period.

“You are made for Rome and Rome for you”: Pope Urban VIII to Bernini

Bernini Vs Michelangelo, learn more about the two Davids from Smarthistory

What your favourite work of art by Bernini? Let us know in the comments below…