What did flying buttresses allow the architecture of the gothic church to do? 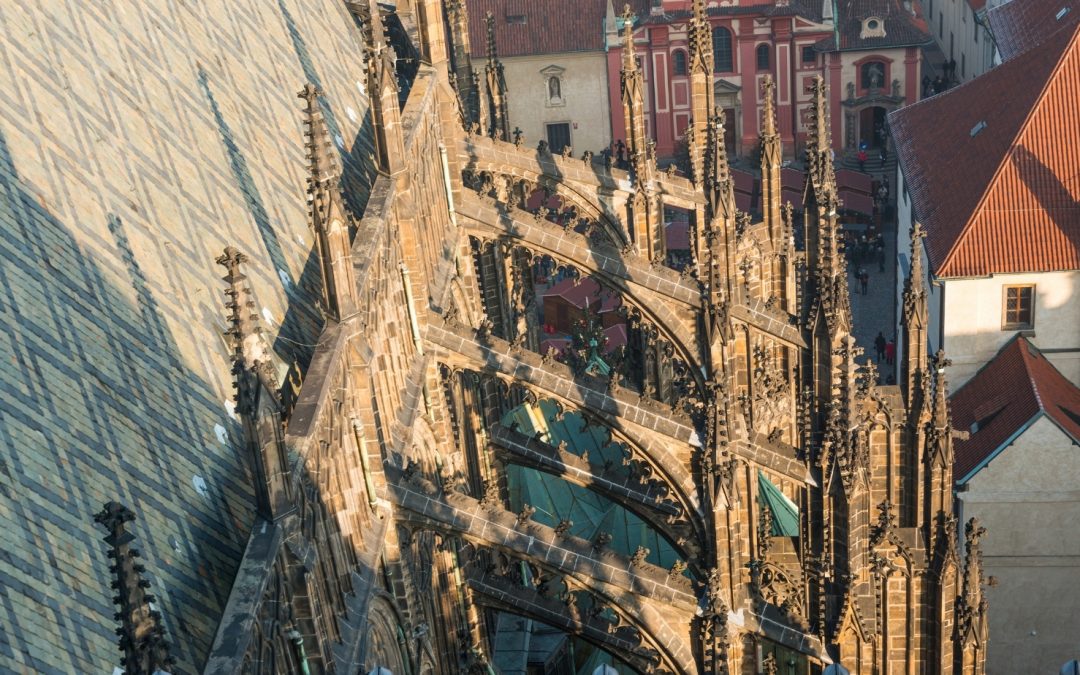 From prehistoric times to the present day, culture has always been intertwined with architecture, and as cultures changed, so did the architecture.

Architecture is the reflection of the culture of every society and is its product. Throughout history, there have been many exceptional architecture styles that we marvel at even nowadays; Classical, Romanesque, Renaissance, Baroque. However, thanks to the engineering innovations and creative decorative elements that influenced later designs, Gothic architecture is deemed one of the most significant and unique styles present in almost all parts of Europe from the 12th until the 16th century. One crucial characteristic during that period was flying buttresses that allowed churches to achieve something different, this is what they did:

What are flying buttresses and where are they seen?

Flying buttresses are a structural part of the building that reinforce and support it. In history, flying buttresses allowed the construction of massive walls and large buildings such as churches without the uncertainty of its stability. They consist of a beam and a half arch that connect the building’s walls with a pier that holds the weight of a dome or a roof. Although Romanesque architecture used internal buttresses to support inner walls, the use of external flying buttresses as an engineering innovation was featured first in Gothic architecture in the 12th century. One of the most notable buildings that utilized flying buttresses is the cathedral Notre-Dame in Paris, whose construction was started in 1163 and completed in 1345. This famous cathedral also represents one of the earlier examples that included this architectural element. Among other prominent buildings that used flying buttresses, we can mention the Duomo in Milan, Saint Chapelle in Paris, and Westminster Abbey in London.

One of the most notable buildings that utilized flying buttresses is the cathedral Notre-Dame in Paris, whose construction was started in 1163 and completed in 1345. 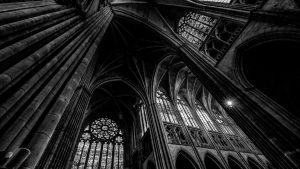 The haunting beauty of Gothic interiors

How did they change architecture?

Flying buttresses pushed architecture to the next level; some even consider them an evolution in its history. Many of Gothic architecture’s distinctive elements were created thanks to this innovation. Thanks to flying buttresses, weight, and horizontal thrust have been balanced, making the construction of the taller buildings possible while securing them from collapsing. Additionally, this allowed the structures to have more windows integrated, giving the interior more natural light and more space for art on stained glass (take Saint-Chapelle for an example). If you connect all the mentioned elements, you will see that all previously mentioned are essential Gothic architecture characteristics. Although they are not quite as popular as they used to be earlier, they are still used to support dams and retaining walls. 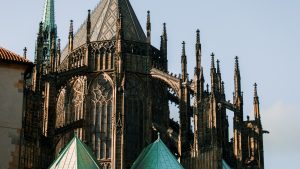 The gothic exterior of a church

How is it different from the architecture during the Romanesque era

The Romanesque era, which was before Gothic, started in the 9th century and lasted until the 12th century. It dominated almost all of Europe and was mainly modelled after Roman and Byzantine architectural styles. Origins of Romanesque architecture are connected with Emperor Charlemagne of the Holy Roman Empire, who wanted to revive the glorious Roman Empire’s spirit. One of Romanesque architecture’s most essential characteristics was its buildings’ massiveness and their thick walls that supported them. The necessity for solid walls also limited the number and size of windows’ making the interior darker. Simplicity characterized Romanesque architecture, with the lack of decoration of the exterior. Other important elements were: round arches for the openings like windows and doors, giant towers to further express the massiveness, and symmetrical plans.

Origins of Romanesque architecture are connected with Emperor Charlemagne of the Holy Roman Empire, who wanted to revive the glorious Roman Empire’s spirit. 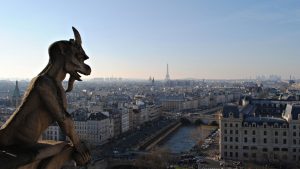 Other architectural characteristics of the Gothic era

Besides flying buttresses, the Gothic era was characterized by other essential elements. Primary design elements were pointed arches, which we can notice in most cathedrals and churches of this style. This element emphasized the building’s height, symbolically pointing towards the sky, like many other Gothic architecture components. Another supporting feature for these buildings was ribbed vaults which supported rounded roofs. Decorations were much more present in this era than during Romanesque times, both interior and exterior. They can be found in the form of statues of saints, historical characters, but also gargoyles and surrealistic figures. The final critical part that we have to mention is large stained glass windows, which depicted Biblical stories through colourful themes and allowed more natural light to fill in the interior.

Although at first sight, one can think that detail such as flying buttresses didn’t play a critical factor in the practicalities and was primarily present to decorate the building. However, in this article, we hope you had a chance to see how sometimes small parts of great structures can actually define and change their complete design and structure.

What’s your favourite Gothic Cathedral? Let us know the comments..